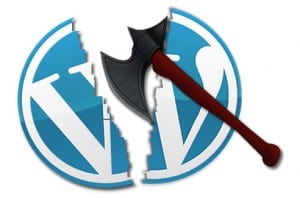 While using their WordPress sites, all the sudden the user sees something pop up. A notice to download some plugin in order to continue using their WordPress site. No problem. Just one simple plugin, right? Wrong. That simple plugin just got their site hacked as soon as it was downloaded. It could even be in a form of an ad on their site. If the hackers get a hold of an important file called the “wp-config file”, the person using their WordPress site is basically going to be in a world of nightmare. People would think that after years and years of these sites being hacked, security would try to make some better improvements. However, the hackers are still getting through.
With today’s sites, the key to keeping sites from being attacked is being cautionate. This is still applied to WordPress as well. Keep updating the password every now and then. The password should be something that can be remembered but also something difficult for someone to figure out. Make sure the right plugin or firewall is installed. The hackers scan what sites are vulnerable and find out which of them are the easiest to be attacked. Those failed login attempts that people get emailed about that they know they didn’t do, that is proof when someone is trying to hack the site. WordPress seems to be on the top of the list for hackers.
For a business WordPress site, it could be extra stressful cleaning out their malicious site, especially the impact it makes on their business. If this is the case, then the main focus would be the security. The slip up catastrophe could lead business reputation into a downfall and at the hands of the hackers, the site could be turned into something that nobody wants to see when they visit a business site- most commonly redirected as a porn site. A professional is needed to be hired for a top-notch secure site.
Even if people think that their WordPress site is very protected and top-notch secured, they can never tell if they will be the next victim. According to US National Vulnerable Database, the top security vulnerability has been with plugins avaliable in the directory as well as from outsite sources. If one WordPress site is hacked, it could lead to other sites being infected, causing that dramatic spike of hacked WordPress sites.