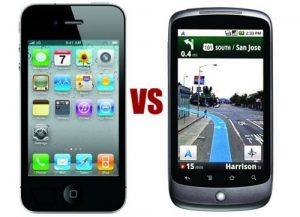 The workplace is mobile today. Teleconferencing is an integral part of the lives of millions of employees in transit around the world; the advent of the smart phone combined with on-line collaboration services allows business to happen anywhere and everywhere.
The mobile workforce is growing in Europe. Mobile phone usage in Ireland is one of the largest per head of population. It is forecasted that 57pc of the workforce in Ireland will be mobile by 2016. Businesses have an important decision to make in this age of many choices. Should the company invest in iPhones or Androids? Vodaphone and O2 dominate 85pc of the marketplace in Ireland and offer models of both phones free with certain plans. Beyond price there is a more serious consideration, the compatibility issues between mobile phones. It is with this consideration that the iPhone ranks higher than the Android.
The Android phone runs Google’s Android mobile operating system. Google offers the Android software to many phone manufacturers such as HTC, Samsung and Motorola. Android phones can vary in size, features, quality and weight. This has lead to a fragmentation, the existence of multiple versions of the Android operating system across different models of phones. If employees choose Androids, a business may find that through the lack of quality control employees buy different models of the Android phone. This can become a problem when an on-line meeting or business app is used and some employees have trouble due to incompatibilities. These problems cause inefficiencies that translate to hidden costs. Apple, on the other hand, has a tighter control over the hardware and software of the iPhone. This standard has lead to more stability. As long as employees update their phones regularly through iTunes, the work force will remain synchronized.
Another consideration to be taken into account is the ease in which a user can configure the interface. Partly due to the flexibility of the Android, the phone is highly configurable. This may be advantageous to a regular user but in terms of business, the phone is the property of the company. Any phone should be able to be picked up and used by any employee. Your business phone is not your personal property. A colleague may need to borrow another colleague’s phone and if the interface has been configured to be extremely unique, time is wasted learning to do what can be done quickly on his or her own phone. The iPhone is not as configurable; its interface is more standard and tends toward the simple.
Another issue to be considered by a business is social networking. Tweeting, facebook and accessing YouTube can waste valuable work time. To prevent this behavior it is best to make it policy that a mobile phone does not have cell phone apps installed that are not business related.
The choice between iPhone and Android is different for personal use as compared to business use. For a number of considerations based on standardizations as well as the availability cheaper iPhone business apps, an iPhone is a better choice for business.